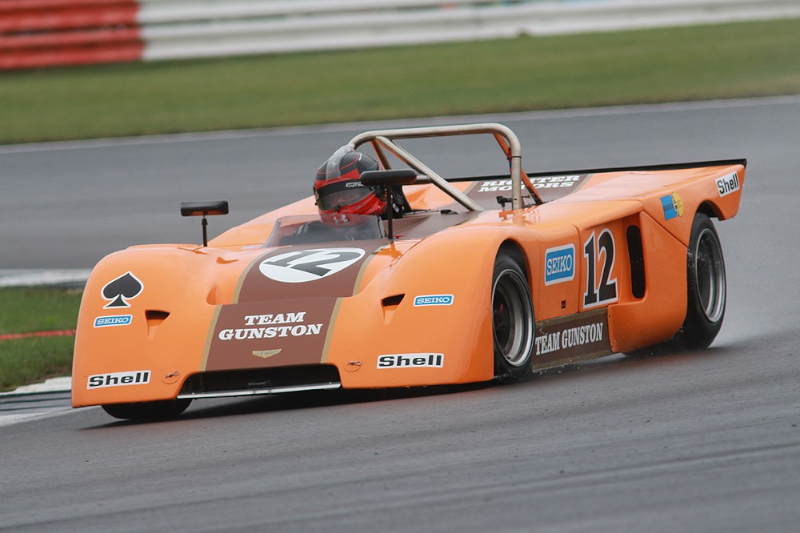 One of the highlights of the Historic Sports Car Club’s 2021 calendar will be the annual Silverstone International Trophy meeting on the Grand Prix circuit on 22/23 May.

Back on the schedule after being lost to the pandemic a year ago, the International Trophy is a fabulous weekend of high quality historic racing and competitors have responded magnificently to the event. Over 370 entries have been taken, and most of the grids feature at least 30 cars. Many grids are even bigger, including the Guards Trophy (46 cars), Thundersports (38 cars), Historic Formula Ford (38 cars) and 70s Road Sports (37 cars).

Even better news is that, for the first time this year, spectators will be admitted so that fans of historic racing can see all of the action. for full details about spectator arrangements please visit silverstone-circuit.co.uk.

The weekend includes the opening rounds of two major HSCC series, Carless Thundersports and the Dunlop Saloon Car Cup. In addition, two races for the prestigious Historic Formula 2 Series give the event even more depth of quality. Fantastic grids right across the weekend are a fine advert for historic racing and the guest race from the GT and Sports Car Cup has a record entry for an over-subscribed capacity 58-car grid.

The Thundersports grid is magnificent, with 38 cars lining up for the opening two races of the year. A wonderfully varied grid includes six Can-Am cars, including the fabulous McLaren M8s of Dean Forward and series newcomer Warren Briggs. Meanwhile, in the mighty March 717 will be Calum Lockie and he will be among the pre-race favourites. Three Can-Am style Lola T70 Spyders include the rapid Mike Whitaker while a pair of T70 Mk3Bs will grace the grid.

A whole host of rapid two-litre cars join the fray with Chevrons, Lolas and Marches all adding to what will be a fantastic spectacle. Heading the 2-litre pack will be John Burton (Chevron B26), Tony Sinclair (Lola T292) and James Claridge (Chevron B23), while the healthy Sports 2000 pack features the Shrikes of Robert Hall and Tim Jacobsen.

The Dunlop Saloon Car Cup kicks off with a double-header in a grid shared with the Historic Touring Car Championship to make a 44-car field. Notable among the DSCC cars will be the mighty Nissan Skylines including the car of Simon Garrad, which should have won recently at Donington Park but for a transmission problem. Four Ford Sierra RS500s and a gaggle of Super Touring cars add to what will be a fabulous spectacle. Touring car legend Steve Soper (BMW M3) is a welcome entry along with two very special Alfa Romeos from the Pearson family.

In the concurrent Historic Touring Car section a gaggle of V8 American cars will set the pace along with a clutch of Lotus Cortinas. Dan Williamson (Ford Falcon) and Mike Gardiner (Lotus Cortina) will be to the fore while the vastly experienced Bill Sollis tops the Mini pack.

Historic Formula 2 has already opened this season with two races at Donington Park over Easter. Now, this re-arranged date at Silverstone replaces the races lost at Hockenheim earlier in May, and another fabulous 27-car grid will gather. Callum Grant was one of the stars of Donington in his Formula Atlantic March, and he’ll be back to take on the two-litre F2 cars once more, although his 1600cc March 79B will feel its lack of power on the long straights and open spaces of Silverstone.

A welcome 2012 debut will be made by Matthew Watts in his sensational ex-Marc Surer March 782, while Martin Stretton is out with his March 712, now intriguingly with a fresh 2-litre engine. Other leading contenders in a very strong field include Andrew Smith (March 742), Mark Charteris (March 742), Matthew Wrigley (Chevron B42), David Tomlin (Motul M1) and Fraser Gibney (Chevron B40).

The Historic Formula Ford 1600 field is fantastic with a 38-car entry showing the strength of the category and the field has quality to match the quantity. This pair of races are sure to be slipstreaming thrillers, and a whole raft of leading contenders will line up, including Grant in his Merlyn but the man to beat is double Snetterton winner Cam Jackson in his Winkelmann.

The weekend’s biggest grid, a whopping 46 cars, is for the opening round of the Guards Trophy for 1960s sports-racing and GT cars. The huge pack of cars will race for 45 minutes on Saturday with a mandatory pit-stop and optional driver change. A dozen Chevron B6s and B8s will make a glorious sight along with seven Lotus 23s.

But the car that could upset the Chevron party is the Lenham of Simon and Cam Jackson. This will be a debut race in the Lenham for the father and son team and there is every reason to expect them to be right on the pace. Andy Newall should be the Chevron benchmark. In the GT division a welcome return by Mike Whitaker in his TVR Griffith should make him the man to beat along with the Lotus Elan of John Davison and the stunning Shelby Daytona Cobras of Mark Martin, Carlos Monteverde and Michael Cullen.

A fabulous field of 32 single-seaters will contest two races for the Classic Formula 3 and Classic Formula Ford 2000 Championship, with the best F3 field of the season to date joined by a clutch of FF2000s. Andrew Smith has been the man to beat so far in his March 783 while Benn Tilley, the current champion, will also be strong in his earlier March 743. With drivers like David Thorburn, Richard Trott and Anthony Hancock also in the field, it should be a fine F3 contest. The Classic FF2000 field is topped by Murray Shepherd.

Also making it seasonal debut will be the Aurora Trophy, which shares a grid with the new Geoff Lees Trophy for 1980s single-seaters. A gaggle of Formula 5000s, topped by Monaco star Michael Lyons, will take on the nimble 2-litre cars in the Aurora section, which is for cars from up to 1980. The Geoff Lees Trophy, meanwhile, is a new initiative from the HSCC to open up racing for single-seaters of the 1980s and is set to grow over the coming weeks and months. The F2 entry in the Aurora race includes Mark Dwyer (March 742) and local racer Mike Bletsoe-Brown (Chevron B27).

The two HSCC Road Sports categories are as strong as ever, and the 70s Road Sports grid will be joined by the cars in the new 80s Production series. The 70s grid is really strong with a gaggle of potential winners on a circuit that will tend to favour the power of the Morgan Plus 8s. Father and son Richard and Will Plant set the pace at Snetterton in the opening race with Will beating his father by a handy margin. Leading the smaller engine cars will be the Lotus Elan of Jeremy Clark, which is likely to be a car borrowed from Brian Mitcham, after Clark’s own car was side-lined at Snetterton by major engine problems, while the TVR squad includes the 3000Ms of Julian Barter and Antony Ross

A fine field of 32 cars from up to the end of the 1960s will contest the Historic Road Sports race at the end of Sunday afternoon. Once again, four Morgan Plus 8s will be tough to beat, but regular pacesetter Kevin Kivlochan will be back on the grid in his mighty AC Cobra after missing the opening race at Snetterton due to business commitments. John Davison’s Elan will be the big threat to the more powerful cars.

A very welcome guest race brings the GT and Sports Car Cup field to the grid for an hour-long race on Sunday afternoon. A magnificent capacity entry shows the popularity of the series with a host of AC Cobras and Jaguar E-types heading a 58-car field. The E-types will be contesting a special trophy to celebrate the 60th anniversary of this iconic model.

On Saturday, the first of 7 races is at 2pm, after qualifying from 9am.

← Prev: CONCOURS OF ELEGANCE 2021 WELCOMES UNIQUE VOISIN C-27 AÉROSPORT GET THE NEED FOR SPEED WITH A FREE DAY OUT FOR DAD* THIS FATHER’S DAY. → 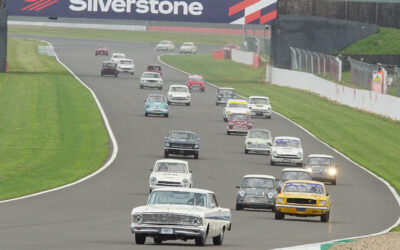 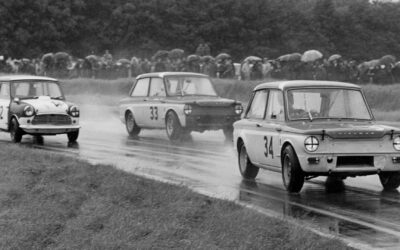 The Historic Sports Car Club will run pilot races for a new Historic Modsports and Saloons category in 2022 as a lead-in to a fuller programme of races in 2023. The inaugural races will be at Cadwell Park during the Wolds Trophy meeting on 4/5 June. The concept behind... 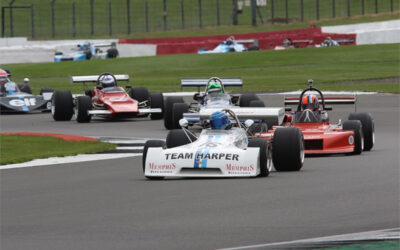 The Historic Sports Car Club has unveiled a pan-European calendar for its 2022 Historic Formula 2 International Series, following two seasons of disruption due to Covid. Since the run-away success of the 2019 season, when Historic F2 was declared ‘race series of the...