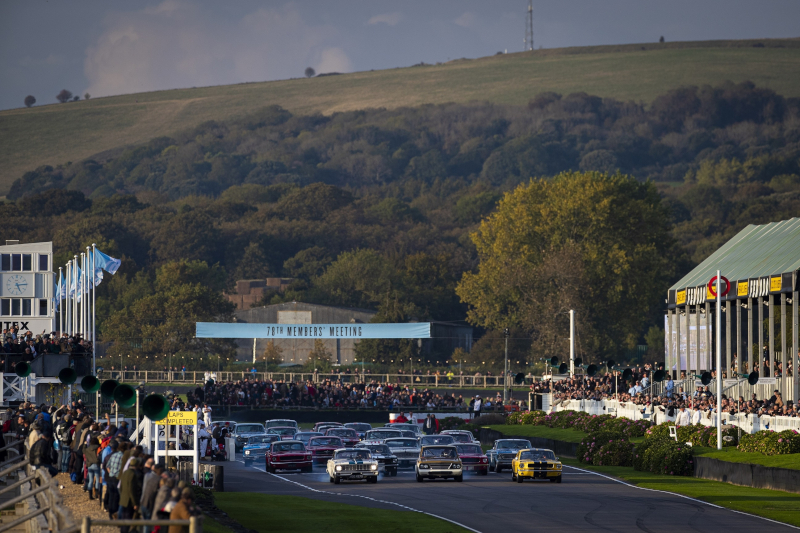 As tens of thousands of GRRC Members and Fellows make their way home from West Sussex that, sadly, is a wrap on the triumphant return of competitive motorsport to Goodwood this year. Originally planned as last year’s season opener, the 78th Members’ Meeting was rescheduled and became the closing event of 2021.

Golden leaves and autumn mists replaced yellow daffodils and sharp spring frosts, but the Goodwood Motor Circuit looked as beautiful as ever in soft October light, providing the perfect backdrop to celebrate the joy and art of motoring and motorsport from its inception to the present day. The oldest machine to take to the track was a 1903 Mercedes 60hp in the S.F. Edge Trophy, and the newest, the Gordon Murray Automotive T.50 hypercar, the latter making its global dynamic debut with its naturally-aspirated V12 screaming to 12,100rpm in the hands of multiple IndyCar champion Dario Franchitti.

An event like no other, the Goodwood Members’ Meeting celebrates more eras and formulas of motorsport than any other. Spectators thrilled to the sight of ‘60s American muscle in the Pierpoint Cup; the often homebuilt 500cc post-war F3 cars of the Don Parker Trophy; 1970s and 1980s GP motorcycles in the Hailwood Trophy and pre-war two-seater Grand Prix cars in the Earl Howe Trophy. Perennial Members’ Meeting favourite the Gerry Marshall Trophy for 1970s and early 1980s saloon cars was this year split into two classes for cars with engines smaller and larger than 2.8-litres, leading to a spectacular finale that saw Mini Clubmans and Ford Fiestas battling Chevrolet Camaros and Rover SD1s in the Sunday evening sunshine.

After a successful trial at SpeedWeek presented by Mastercard, rally cars returned to the Goodwood Motor Circuit. The Goodwood Super Special presented by Cooper Tires was a tight and twisting course, using parts of the circuit and outfield to challenge a range of machinery dating from the late 1970s to the early 2000s. The first of two timed runs was made on Saturday evening, with spotlights blazing and exhausts flaming, while the decider was held on a sharply sunlit Sunday morning. Winner of the post-Group B class was Gary Le Coadou in a Toyota Celica GT-FOUR while the earlier era class was won by Martin Overington in the crowd-favourite and very rowdy Metro 6R4. Special mention should go to Stig Blomqvist driving the ex-Carlos Sainz Ford Escort Cosworth in a very spirited manner.

Members’ Meeting is renowned for its celebrations of motorsport milestones which bring together eclectic and unique collections of cars. This year saw 14 Jaguar XJR-15s take to the track at the same time, creating a 168-cylinder symphony. This was only surpassed by a moment capable of bringing a tear to the eye of any Formula 1 fan as Bruno Senna, wearing a replica of his uncle Ayrton’s helmet, took to the track in the McLaren MP4/6, the last V12, manual car to win an F1 championship in Senna senior’s hands.

Alongside the McLaren in the paddocks were a collection of cars in which Ayrton had made his way up through the Formula 1 ranks, including the very first such car he tested, the Williams-Cosworth FW08C and his first winner, the Lotus-Renault 97T. Opposite that victorious display was an array of cars celebrating the work of Gordon Murray, including the beautiful, championship-winning Brabham BT52, and culminating in the first public appearance of the Gordon Murray Automotive T.50s Niki Lauda.

Away from the track, racegoers were entertained by the quirky activities which make the Members’ Meeting unique and contribute to the House Points Competition which runs throughout the weekend, including the tug-of-war, duck herding, and axe throwing. Saturday evening was rounded off with a party in the infield featuring stilt walkers, fire throwers and live music, followed by a spectacular firework finale.

The event was streamed live to a global audience of GRRC Members and Fellows with many joining over the course of the weekend to enjoy the action online. A selection of the eclectic and thrilling races that make the Members’ Meeting such a unique and charming motorsport event will be publicly available on the Goodwood Road & Racing YouTube channel for the next six weeks. Following this, the races will join three decades of Goodwood Motorsport in the archive available exclusively to GRRC Members and Fellows.