THE CONCOURS OF ELEGANCE CELEBRATED ITS MOST MEMORABLE RUNNING YET 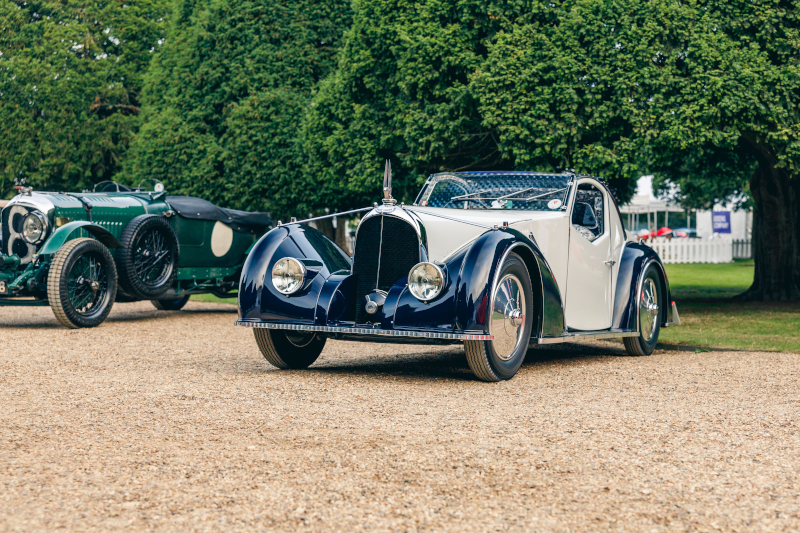 The Concours of Elegance, presented by A. Lange & Söhne, celebrated its most memorable running yet, with record numbers of guests enjoying the finest line-up of vehicles seen in the UK across three days of glorious sunshine. Hosted at Hampton Court Palace, the event welcomed nearly 1,000 cars in total, charting the full evolution of luxury and innovation in automotive from the pioneers right through to the modern day.

The ‘Best in Show’ award, voted by the owners of the cars on display, went to a unique art deco Voisin C-27 Aérosport. Designed and built in 1934 by one of the greatest geniuses of the 20th Century, Gabriel Voisin, the C-27 Aérosport exhibits many traits of Voisin’s aviation background. The provocative car was created for the 1934 Paris Motor Show but didn’t quite hit the mark in terms of sales. After the expo, two roadsters were built on shortened Aérodyne chassis – which became known as the C27, and its glorious Art Deco styling captivated the heart, a collaborate between Voisin and André Noël-Noël Telmont, an architect who had met Voisin during their education.

The owner of the Voisin C-27 Aérosport received the all-new Pegasus sculpture trophy, created by renowned wildlife sculptor and artist, Robert Rattray, in meticulous detail over the course of six months.

Outside of the main Concours of Elegance cars, nearly 1,000 models parked at Hampton Court Palace for the weekend, including a collection of Future Classics, from a Ferrari LaFerrari to a Bentley Continental GT No.1 Edition by Mulliner. In the class celebrating the ultimate collector cars of tomorrow, the prize was awarded to the Scuderia Cameron Glickenhaus 004S.

Also on display were some of the finest examples from the UK’s most prestigious car clubs, as part of the Club Trophy presented by the Royal Automobile Club and supported by Classic & Sports Car. A panel of expert judges, including HRH Prince Michael of Kent and Classic and Sports Car’s Simon Taylor, deemed a Fiat Dino Spider to be the best on display and will now take its place among the main concours cars for the Concours of Elegance 2022, which is already scheduled to take place from 2-4 September.

Our Car Club displays, sponsored by Classic & Sports Car, formed a line-up of individual marques around the perimeter of the Garden, including the Bentley Drivers Club, Aston Martin Owners Club, Maserati Club and many more. Each day the Classic & Sports Car editorial team picked their favourite, with a spotless Maserati 3500 GT winning the trophy on Saturday and a Mercedes 190SL, lovingly restored by its owner, winning on the Sunday.

The Jaguar Trophy was won by a highly original E-type Series I with outside bonnet locks, believed to be the best of its kind in existence. The Bentley Trophy, meanwhile, was awarded to a Bentley MkVI with a body from Freestone and Webb by a panel of Bentley experts led by Giles Crickmay of Frank Dale & Stepsons.

Returning after its introduction at last year’s event, the Bridge of Weir Leather Design Award, picked by a committee of automotive designers gathered by the Scottish company, was awarded to the Delahaye 135MS Speciale Faget-Varnet. Faget-Varnet created several bespoke bodies for Delahaye, and this particular model was made for the 1953 Paris Motor Show, based on a 135 chassis – it would be the last ever coachbuilt Delahaye.

The 30UNDER30 Best in Show, newly introduced to showcase the cars of enthusiasts under 30, went to a Vauxhall 30/98, while the Junior Concours winner – for scaled down children’s cars; pedal, electric or petrol – was a Jaguar E-type.

The main vehicle features were complemented by line-ups from the world’s greatest classic car specialists and car manufacturers, many of whom were displaying cars at the event for the first time. Jaguar chose Hampton Court Palace as the venue to reveal its C-type Continuation, a recreation of the 1953 Le Mans-winning cars. Meanwhile, Bentley showcased its first-ever Continuation, the Blower, Bizzarrini revealed plans for its first Continuation car, and coachbuilder Zagato displayed its relaunch of the historic Iso Rivolta brand, with a modern take on the classics of the 1960s and ‘70s, the GT Zagato.

Outside of the automotive displays, Concours of Elegance was an occasion of pure luxury, with champagne provided by Charles Heidsieck, picnics by Fortnum & Mason, live stage interviews with Chubb Insurance, hosted by Jodie Kidd and a collection of art, jewellery and fashion displays. Presenting Partner, A. Lange & Söhne, showcased some of its latest intricate timepieces.